Whitby Golf Club was originally established by the signing of a charter on 6th December 1891 with its first AGM held at the Crown Hotel, Whitby in January 1892. The club was formed by a number of Whitby gentlemen with the principal promoters being Major A Simpson, Lieutenant Colonel T N Marwood, Captain J C Simpson, Mr A Marwood, Mr H Weighill, Mr J Moore and Mr L Greenwell – all names still familiar when you view the honours boards on display in the Clubhouse.

The course was originally located in the village of Goathland. For the first 4 years there were 6 holes around the village common and up on to the moorland above. Golf remained in the village until the war years, but the decision was taken in early 1895 to move the club to a new course to its current location at Upgang. The White House hotel served as the original clubhouse. The following quote was recorded at the time “there is a very large ravine to carry as well as several ponds and other obstacles which will make the course one of the most startling in this out of the way district for miles around”– sentiments that still hold very true today! 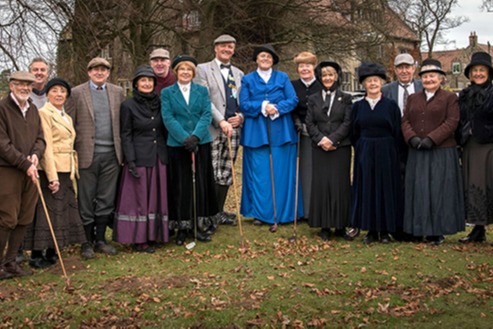 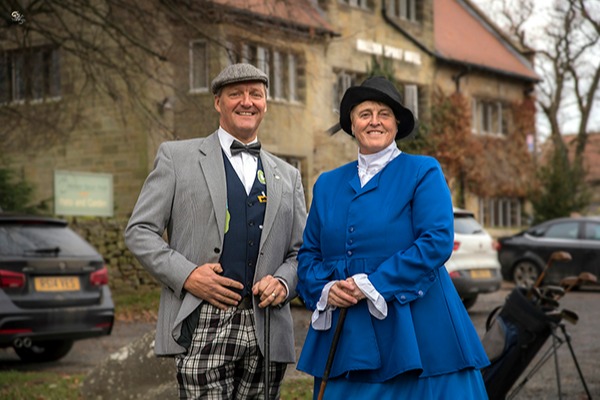 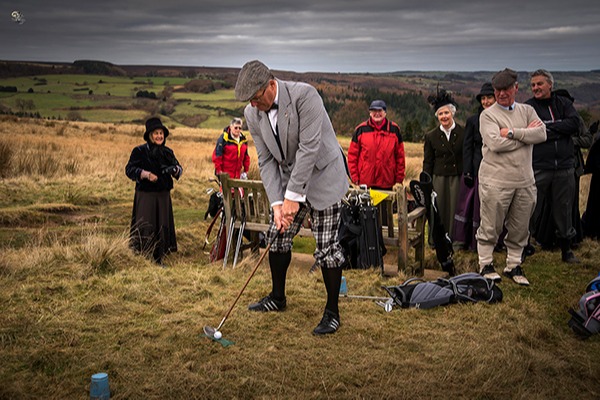 The start of our anniversary celebrations began by turning the clock back 125 years and returning to our roots in Goathland.

Permission was granted by the landowners the Duchy of Lancaster to play on the moorland containing the original course a team set about locating the original moorland holes close to the Mallyan Spout hotel. Even after 125 years it was still possible to locate four of the original holes and our green staff reinstated tees and greens plus a small putting green sited opposite the hotel.

On Sunday 4th December 20 brave members dressed in Victorian costume and played in pairs for the very special trophy. This is an original Gutta Percha handmade golf ball dating back to the late 1800’s which was found by one of the villagers in a hedgerow in Goathland in 2014. The men cut fine figures in their Plus Twos and Fours with the ladies elegantly dressed in the long dresses and hats. Playing in Victorian clothing on a regular basis on such terrain must have been a very definite additional challenge to a round! A small number of non-playing members helped players “spot” their golf balls and cheer them on alongside a contingent of local residents who also came out to support the event.

The day was concluded with a lovely Sunday lunch and prize giving at the Mallyan Spout hotel, which was the original clubhouse. The winners of the 1892 Goathland Ball were Iain Pyman, Golf Professional and Honorary member of Whitby Golf Club and Doreen Richardson, Past Lady Captain 1990. Runners up were Colin Rutland, Club Captain 2016 and Wendy Hurworth, Lady Vice Captain 2016.

Following the launch a number of events and competitions are planned throughout the year. There will be special 1892 Open Days to which all entrants will receive commemorative gifts and all visitors playing on the course during 2017 will received a memento of their round. The club is also producing a commemorative brochure with a full history of the club which will be available to all members and visitors to the course.

The celebrations concluded on 2nd December, 2017 with a grand Anniversary Ball and Club Presentation night at the Saxonville Hotel in Whitby.

Note on Iain Pyman: Iain was born in Whitby and was the English Boy’s Stroke Play Champion in 1991. He competed in the Open Championship at Royal St Georges in 1993, finishing as the leading amateur in T27th place, and in the Walker Cup team. Iain turned Pro in 1994 and has played on both the European and Challenge Tours.